“Look deep into nature, and then you will understand everything better” – Albert Einstein

There’s something comforting about Vermont’s rolling mountains huddled around you wherever you go. Ask Vermonters and they’ll tell you, leaving Vermont for flatter spaces is disconcerting. While there is beauty in sunny coastlines and wide open plains, most would tell you when they leave Vermont, they cannot wait to get home. But the comfort of these Green Mountains isn’t the only reason to love Vermont. Below are five other reasons Vermont is the best place on earth. 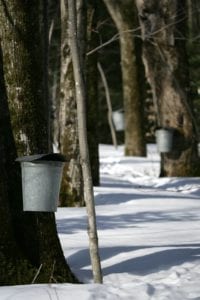 If you’ve never tried real maple syrup from Vermont, you’re missing out. Each year, just as the ground begins to thaw, sap in maple trees starts to flow. When sap is collected, it’s colorless and bears little resemblance to the delicious amber syrup that develops after boiling, but it’s more than worth the effort. Did you know it takes 40 gallons of sap to make one gallon of maple syrup? We have the strictest maple grading standards in the world, and Pure Vermont maple syrup has subtle complexities not existent in thinned-down store varieties. This is maple you won’t find anywhere else. 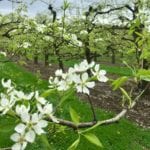 When you think of apples and Vermont, what’s the first thing that comes to mind? For most, it’s apple pie, hands down. And naturally, when you think of apple pie, you think of fall and changing leaves and cool, crisp air. But apples don’t just fill the orchard in early fall. They actually start much earlier, around the time rhubarb starts to sprout and Memorial day picnics are being planned.

Not long after maple season ends, the temperatures begin to warm slightly, and everything beings to grow. One of our favorites? The apple orchards in full bloom. A sunny day spent in a sweetly perfumed apple orchard is hard to top. If we’re lucky (and we live in Vermont, so we’re pretty lucky) the weather is nice enough for a midday picnic in one of the many apple orchards. Did you know every apple blossom has the ability to transform into a fully formed, delicious apple? It’s amazing to consider when you look over an orchard positively bursting with apple blossoms, and think how many apples there could be come harvest time.

Sunsets on the Water in Vermont 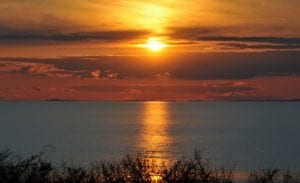 It’s almost impossible to watch a sunset and not dream. And sitting on the shore, looking out over the water as a golden sun sets the sky on fire, all those dreams seem possible. As the sun touches the water in those last moments before dark, there’s a feeling of settling; the sun settling into the horizon, the day settling into the night, and the promise of tomorrow settling into the peace of the moment. There’s a reason poetry abounds when it comes to sunsets. They are nature’s reminder to enjoy every moment, and be grateful, how ever long they last.

“And if you’re ever lonely, just look at the moon. Someone, somewhere, is looking at it too.”  – Unknown 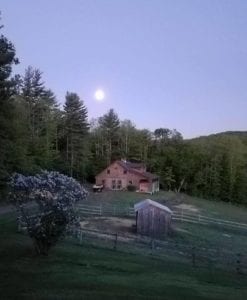 There is something about the soft glow of a full moon spread over the mountains and hills at dusk. This farm in South Royalton, Vermont looks especially inviting in the colors of early evening with the moon rising over the trees. With no billboards to clutter the view, and more back roads through valleys and mountains than you can count, a night like this is easy to come by if you know where to look. And even through this sort of view isn’t an unusual one, ask any Vermonter and they’ll tell you–it never gets old.

Every year, as the days get shorter and the nights become crisp and cool, the green and purple of our mountains begins to change. First, little pockets of yellow and gold begin to touch the taller trees. As the days go on, vibrant reds and oranges being to replace the rich greens.

Then, one foggy morning you wake up, and the trees seem lit from within. There are more shades of yellows and oranges and reds than anyone has names for. The ground is covered in a crisp, crunching covering of leaves that have already begun to fall. There is a new scent in the air, reminiscent of apple cider, pumpkin spice, and coming snow. It’s a sign that it’s time to pull sweaters and scarves from their summer hiding places and start to think about the winter months ahead. It’s a little magical. No wonder people come from all around for a chance to take it in.

(Read more about fall in Vermont here: Apples and Maple)