Apple Pie Without the Cheese — Is Like A Kiss Without The Squeeze! 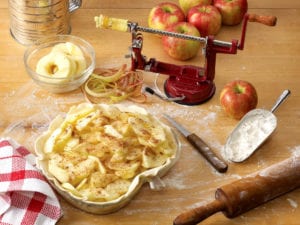 In a world of increasingly uniform manufactured foods, one dessert dish remains defiantly regional: the humble apple pie. You would think there could only be so many ways to make apple pie—after all, it’s just apples, crust and sugar, right?—but somehow every region of the country has its own special version. Single crust, double crust, lattice crust, and crown crust. There are Amish sour cream apple pies, apple-maple pies, Savanna apple pies (with pecans, of course) and even Pennsylvania Apple Pandowdy, sweetened with molasses. Everyone is great in its own way.

I suspect the apple pie’s reputation as a simple, traditional dessert has helped maintain the regional variety. You see, when you are making some exotic dessert like passion fruit pudding or kiwi martini mousse, the first thing you do is Google the recipe—and that means they all tend to be the same. But when you want to bake an apple pie, you reach for your mom’s old recipe card, stained and creased and covered with flour. Those recipe cards are a treasure, full of memories and American history. Hold onto them for all you are worth!

Vermont has its own style of pie too. The Vermont apple pie has a flaky double crust topped with a thick slice of warm (but not melted) Cheddar cheese. The sharp, tangy Cheddar is the perfect complement to sweet, mellow apples and brown sugar. In fact, apple pie is always supposed to be served with cheese, by legal statute, although a glass of milk or a scoop of ice cream are considered “good faith” efforts. That’s our legislature for you.

And in Vermont, it is considered fine to have a slice of pie and cheese for breakfast, if you plan to “do a day’s work.” As an incentive, that’s hard to beat!