Fans of The Vermont Country Store have enjoyed our Vermont Common Crackers for many years, but few know they have quite an uncommon history.

When Common Crackers debuted in Vermont in 1828, they were the first commercially made crackers in America. They are a plain, dry, round biscuit that you split in half before topping with a bit of something savory or sweet. Their simple ingredients — just flour, water, shortening and salt — gave them a long shelf life. Farm families would buy a forty gallon barrel full in the fall, which would last through the winter.

Common Crackers were a country store staple, including The Vermont Country Store.

Many Uses for a Simple Cracker

Common Crackers’ plain taste made them a versatile pantry staple for Yankee cooks and their families. When crushed, they make a great filler for meatloaf and stuffing. They can also be used as a coating for baking and frying in the way you would use breadcrumbs. Of course, they’re great on their own served alongside soups and stews or spread with jam or butter. A simple bowl of broken up crackers with milk was often considered the ideal Sunday supper.

Julia Child was a fan of Common Crackers and used to order them from us. She said about them, “They’re absolutely marvelous with fish chowders, but I like them best split in half, brushed with butter and baked in a 375 degree oven for just a few minutes until browned. Vermont Common Crackers are so versatile– they can be crumbled and mixed into stuffings or they can top a scalloped oyster casserole. Of course, they are lovely when sprinkled with some grated Vermont cheddar cheese.” 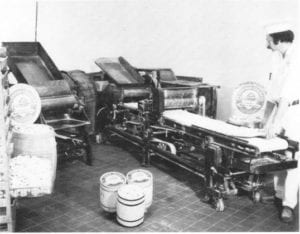 A version of common crackers were made all over New England with each company usually named for the town in which it operated.

In Vermont, Common Crackers were made in St. Johnsbury and called St. Johnsbury Crackers, and then, when production was moved to Montpelier, they were called – you guessed it – Montpelier Crackers. The machine was powered by horses, not machinery with horsepower. A horse walked on a huge inclined treadmill, turning a shaft connected to gears and a flywheel for a belt.

Later on, the Cross Company made the crackers, baking crackers three days each week and delivering them the other two. When that company went bankrupt in 1970, the cracker machinery went up for auction. Our father, Lyman Orton, won the auction and began making Vermont Common Crackers at our store in Rockingham, Vt. All these years later, we still use the same machine, but it’s been retrofitted with an electric motor, so crackers can be made much easier!

The next time you visit The Vermont Country Store, you can sample some of our Vermont-made cheese or our jams and jellies.  Be sure to try it with one of our Vermont Common Crackers, a special product with an almost 200 hundred year history!

For the Orton Family